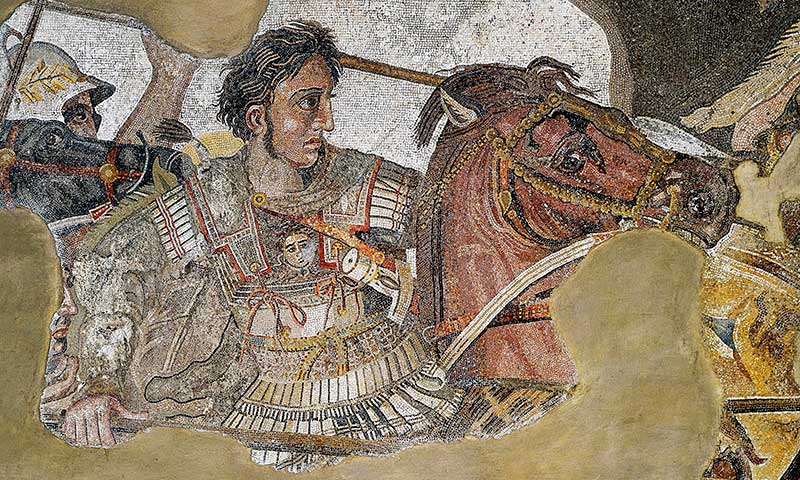 After he pushed the Persians out of Greece, he came to Anatolia through Dardenelles with a strong army. He had 30,000 infantries and 5,000 cavalry. On the other side Ionian strap (regional governor) of Persia, Spithridates set out his army of 40,000 infantries and 20,000 cavalry. The war broke around the bank of Granikos river. Satrap was killed and the Persians were defeated in a short time. Alexander entered Ephesus in the following days without any resistance. Before he arrived, Persian hired Greek soldiers fled the city. Persian rulers of the city were stripped of their power. He ordered the people of Ephesus to donate the money to Artemis temple which was paid to Persia previously, as tax.

After Ephesus, Alexander continued to conquer a huge land; whole Anatolia, Persia and even parts of India. Lysimakhos, a general of Alexander took control of Ephesus in 290 B.C. when great ruler died. Other parts of his empire were divided between his leading generals.

Lysimakhos rebuilt the city and gave his wife’s name “Arsinoe” to the city of Ephesus. But this new name never gained recognition by the citizens. The city walls from this era between Pion and Koresos mountains have remained in good shape till today.

Later, a long era of continuous fights had took place between the rival kings of Ionia over the rule of Ephesus and other west Anatolian cities. Initially, kingdom of Seleukos became the ruler. Then, Ptolemaios and again Seleukos claimed the leadership. In 188 B.C. Pergamum became the ruling kingdom. During the reign of Attalos III, the king of Pergamon Anatolian cities lived in a reasonably high level of autonomy. In his testament he offered his ruling rights of Anatolia to Rome in 133 B.C. His brother Aristonikos rebelled against Rome and his brother’s rule just after this. He gained the control of the coastal cities such as; Colophon and Samos. He won battles against the Ephesus fleet and Roman army. Finally, in 130 B.C. a Roman army killed him and destroyed his forces and claimed the land of Anatolia.

Heavy taxes made Romans very unattractive in a short period of time. By the year 129 B.C. a discontent began to show up throughout Anatolia against the Romans. The king of Pontus, Mithridates IV came to the Aegean sea with his fleet of 300 ships. He was welcomed by the western Anatolians because of his Anatolian origin. He took over major Ionian cities without any resistance. He ordered that all Romans and their collaborators be killed immediately (88 B.C.). It is estimated that 80,000 people were massacred in a single day. He declared Pergamon as the capital of the Pontus kingdom. In a very short period of time he took over Greece as well.

In 87 B.C. Rome sent general Sulla with a very strong army to Greece. He took Athens back and continued to march to Ionia.

Mithridates left Pergamon and moved to Pitane. The army of Sulla won battles in and around west Anatolia against Ionians. They were forced to pay 25,000 talens for war damages to Sulla. The struggle of Mithridates continued until he was killed in 63 B.C. By this time the Roman Empire became the sole ruler of Anatolia.