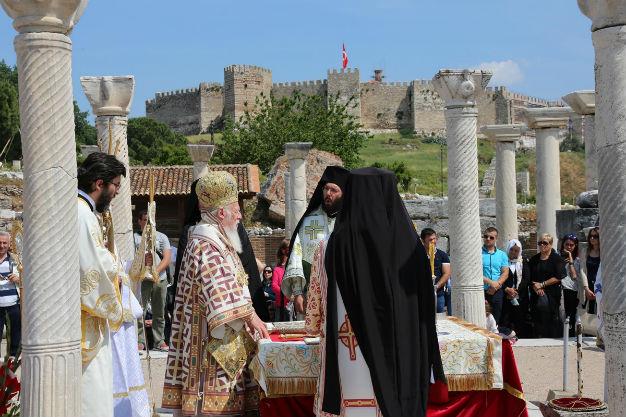 Fener Rum Patriarch Bartholomew led a religious ceremony on May 8 at the ancient site of Ephesus in the Selçuk district of Turkey’s Aegean province of İzmir, marking the death of St. John the Apostle.

Bartholomew arrived in Selçuk to lead the ceremony at the House of Virgin Mary, joined by scores of Christians from the region and nearby Greek Islands including Rhodes, Lesbos and Chios.

The House of Virgin Mary, located inside the ancient site of Ephesus, is a shrine believed to be the home of the mother of Jesus after she was taken there by Saint John.

Following the ceremony, Bartholomew visited the district governor and mayor of Selçuk alongside the high priest of İzmir’s GreekOrthodox Church, Kyrillos Sykis, and the metropolitan of Austria and Hungary, Arsenios.

“We are happy to be with Patriarch Bartholomew not only on May 8 each year, but all times. This land belongs to all of us, this is where civilizations have met,” Boyacı told reporters, saying there were many more “openings” planned in cooperation with the patriarchate.

Bartholomew responded warmly to the mayor’s remarks, saying they “never felt like strangers in Selçuk.”
“I feel at home here. We had a religious ceremony here in February last year. This year we are here for the ceremony of St. John the Apostle. We wish for God’s grace to be upon Selçuk,” he reportedly said.

Bartholomew’s visit to Selçuk was rounded off with a trip to the nearby village of Şirince.

The small town of Selçuk, in the Aegean province of İzmir, hosts around 2.5 million tourists annually to visit the nearby Ephesus.

Selçuk hopes to lure even more tourists by focusing on faith tourism through the Virgin Mary House, one of the most important sites for the Christian world, and the four ancient churches around it.

“We invited Patriarch Bartholomew for the first feast and he was positive about it. We would expect tourists from many countries, especially Greece and Russia, to come for such feasts. This would make a great contribution to the town,” Bakıcı told reporters last year.

The Saint John Church, one of the seven churches mentioned in the Bible, is located in the ancient site of Ephesus in the Selçuk district. St. Paul and St. John lived in the area for some time, with the latter spending his final years in Ephesus.